Cale Self is the Assistant Director of Bands and Instructor of Low Brass at the University of West Georgia in beautiful Carrollton, GA. Also serving as Director of Athletic Bands, Dr. Self has primary responsibility for directing the UWG Marching Band "The Sound That Lights the South" and the "Wolfgang" Basketball Pep Band. He also teaches studio trombone, tuba, and euphonium, conducts the UWG Symphonic Band and Brass Ensemble, teaches brass and instrumental methods courses, and supervises student teachers. Dr. Self also currently serves as the Dean of Students at the Brevard Music Center in the scenic Blue Ridge Mountains of western North Carolina. In that capacity, Dr. Self administers the non-musical side of life at BMC, supervising a staff of 4 assistant deans and 36 resident advisors as well as the 400 student musicians who study at the music center each summer. In addition to his administrative duties, Dr. Self has also had the opportunity to perform with the Brevard Community Band, the Transylvania Symphonic Band, the Tuba-Euphonium Ensemble, the Brevard Brass, the Brevard Sinfonia, and the Brevard Music Center Orchestra. Dr. Self holds degrees in music education and instrumental conducting from West Texas A&M University in Canyon, TX and a Doctor of Musical Arts degree in euphonium performance from the University of Georgia in Athens (Go Dawgs!). His teachers include David Zerkel, John Lynch, Allen Crowell, Patrick Sheridan, Gary Garner, Joe Nelson, and Joseph Cox. He has participated in lessons and masterclasses with Christian Badea, Marty Erickson, Adam Frey, Sarah McKoin, Tim Northcut, Sam Pilafian, Scott Watson, Charles Villarubia, and Demondrae Thurman. Dr. Self has performed for the Texas Music Educators and Texas Bandmasters Associations, the College Band Directors National Association, the International Tuba Euphonium Association, the US Army Band Tuba Euphonium Conference, the BOA National Concert Band Festival, and the National Band and Orchestra Festival at Carnegie Hall. He has performed under Keith Lockhart, JoAnn Falletta, Steven Smith, Kraig Williams, Don Wilcox, James Keane, Harry Begian, Michael Haithcock, Manu Mallaerts, and Fred Mills, and has performed with the Georgia Brass, the Athens Choral Society, the Bulldog Brass Society, the WTAMU Symphonic Band, and the UGA Wind Ensemble. He is a two-time concerto competition winner, and was a finalist in the 2006 International Tuba Quartet competition as a member of the UGA Tuba Quartet. Dr. Self maintains a diverse performing schedule as a director, soloist, conductor, adjudicator, arranger, and clinician. In his free time, he enjoys escapist fiction, 80’s pop music, and fine cigars. 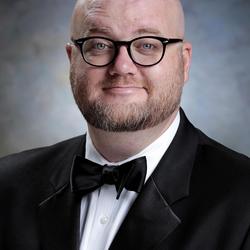 Has Studied Instrument For:
23 years

Favorite Composer:
I don't have a favorite, but I always come back to the works of Mahler, Wagner, Beethoven, Barber, and Stravinsky

Teacher:
I've had many - see my bio above

Aboriginal Voices by DrSelf over 9 years ago
36422

Relentless Grooves: Armenia by DrSelf over 9 years ago
36798

Fantasie Originale (excerpts) by DrSelf over 9 years ago
40551