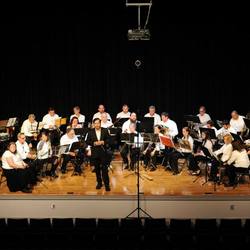 An outreach of the Carroll Symphony Orchestra, the Carroll Community Wind Ensemble was founded in August of 2011, under the direction of CSO Conductor Terry Lowry. This volunteer group is open to anyone living in the West Georgia/East Alabama region who played a symphonic band instrument in high school or college. The group rehearses every Tuesday evening and has grown to nearly 40 members in less than two years. The group has become a vital part of the musical life of Carroll County by performing both a Fall and Spring concert at the Amp and by performing at the Carroll County Veteran’s Park Association’s Memorial Day Ceremony, the People’s Parade on July 4, seven performances of Christmas Music at various locations in Carrollton, performances at Horizon Bay Assisted Living Center as well as Carrollton Manor, and accompanying the University of West Georgia Opera production of Bizet’s Carmen.