9233
The (Heroic) Polonaise, Op. 53 in A flat major by Frederic Chopin
by rcsolomon
about 4 years ago

9387
The (Heroic) Polonaise, Op. 53 in A flat major by Frederic Chopin
by rcsolomon
about 4 years ago 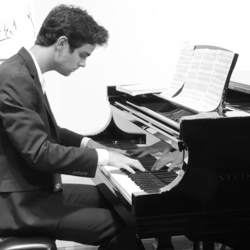 Robert Solomon is a native of Marietta, GA and a classically trained pianist since the age of 6. Robert started performing piano as an accompanist to high school choirs, his church’s youth band, and local theatrical productions. However, his desire to perform solo introduced him to the beautiful harmonies and classical melodies of Chopin, Grieg, and Debussy. As a classical pianist, Robert was awarded 1st place at the local East Cobb Kiwanis Club Art and Music Showcase and 3rd place at the state-wide Georgia District of Kiwanis Annual Art and Music Showcase for his performance of Chopin’s Heroic Polonaise in 2016. Later that year, he performed Pablo de Sarasate’s Zigeunerweisen alongside virtuoso violinist Clarissa Bevilacqua at the NY International Artist Showcase in Weill Recital Hall at Carnegie Hall. He also performed on-stage throughout DramaTech Theatre’s theatrical production of The Musical of Musicals (The Musical!) and currently runs a multimillion-viewed music YouTube channel. You may have seen him The 11 Most Annoying Types of Pianists video which boasts over 5.5 million views. As a solo pianist, Robert’s repertoire ranges from the early classical music of Johann Sebastian Bach, Ludwig van Beethoven to the works of Frederic Chopin, Claude Debussy, Franz Liszt, Edvard Grieg and finally to the modern classical music of Luciano Berio, Jon Schmidt, Terry Lowry.

Has Studied Instrument For:
13 years

Favorite Piece of Music:
currently Grieg's Concerto No. 1 in A minor